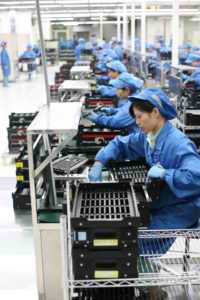 In recent years, direct trade with China has contributed 5.5% to Australia’s GDP and figures have only increased.

The agreement puts Australians in a competitive position in key areas such as aged care, agriculture, education, manufacturing exports, services, investment, resources and energy.  Alongside trade deals already signed with Korea and Japan, ChAFTA is the newest piece of a powerful alliance between Australia’s major trading partners in North Asia.

According to McKinsey and Company, cross-border consumer e-commerce transactions equated to approximately $50 billion in 2015.  CBEC is a unique import channel making it possible for Australian business to sell products online to consumers (B2C).

In 2013, Australia’s goods and services exports to China exceeded $100 billion, and two-way trade reached $150 billion with figures increasing since then.

More than 130 delegates from over 70 Australian organisations attended – including representatives from the Australian Government and aged care finance companies, infrastructure and architectural designers, facility operators and educators.

There are great opportunities for Australian VET organisations in China, according to Antoine Barnaart, ACCVETP Leader due, in part, to China’s 10 year plan for reform in the education sector.

The Chinese government is seeking growth of 16% in higher education across a decade, but aims to double the number of skilled workers via vocational and technical training during the same period.

The project involves 30 secondary VET colleges and a range of other institutions including Chongqing Normal University, the Chongqing University of Arts and Sciences and the Chongqing Research Institute.

Pioneering reform in VET across five industries, the project will develop a model that can be replicated on a national basis in the People’s Republic of China (PRC).

The Australian Chinese (Chongqing) Vocational Education and Training Project (ACCVETP) is a five-year project funded by AusAid and has involved TAFE institutes across Australia, including Illawarra Institute.

VET is alive in China, providing great opportunities for Australian partners.  Service providers and investors will also be able to reap the rewards of new and improved levels of access in China – one of the world’s biggest economies.

If you would like to know more about VET, workforce planning and development strategies for international partnerships please contact Wendy Perry at wendy@wb.switchstartscale.com.au.