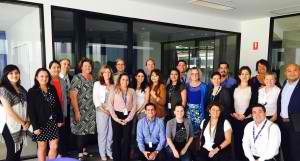 Education, vocational training, and life skills are what Ecuador needs to thrive, according to the World Economic Forum.  All Ecuadorians must have 21st century skills to succeed in their fast-evolving global digital economy.

Literacy and numeracy skills, as well as collaboration, creativity, and problem solving skills could help take the country to new horizons.  As it stands, for people in Ecuador there is a gap in the education they need. Many countries in Latin America rely on volunteers to teach English, yet this isn’t sustainable.

Facing rapid economic growth, a ‘middle income trap’, political instability, and environmental threats, the report believes skills and education could be the key to development.

In 2011, the Government reformed secondary education – giving youth two options; scientific or technical preparation. Plans to boost the technical path are in place.  Ecuador continues to have ongoing developments in reforming qualifications and frameworks. SECAP, a virtual learning centre, is one example.

VVOB is another association working to develop education in Ecuador.  Their work focuses on capacity development of partner organisations and creating better links between education and the labour market.

Ecuador has a population of 16.3 million and an unemployment rate of 5.4%.

The third quarter of 2016 saw Ecuador’s economy shrink, and GDP fall by 1.6% – which, in fact, was an improvement from the 2.2% drop in the second quarter.  The country’s recent pledge to cut output of oil by 26,000 barrels per day has seen no economic changes, just yet.  Mounting interest payments is an ongoing problem.

This small country depends on oil exports for a third of its federal budget.  Yet, continued progress has been made to drill the world’s most famous rainforest.  This decision dates back to a cash deal with China back in 2008 – resolving Ecuador’s $3 billion debt struggle.  At the time, China was responsible for two-thirds of Ecuador’s financing, and 90% of its oil exports.

This runs alongside new Government promises for solutions to the country’s acute economic problems as the Ecuadorian President assumed the leadership of the Group of 77 and China with a commitment to promote economic and social equality.

Rafael Correa, Ecuador’s President, will focus on fighting against the precariousness of the workforce in less competitive countries by Western nations.

Like many other developing countries, continued focus on education, entrepreneurship and innovation can positively affect Ecuador’s economical stance.

To invest in education in your country, region, or TVET system contact Wendy Perry via wendy@wb.switchstartscale.com.au.