Insights on Engaging Employers in Skills Development for the 21st Century 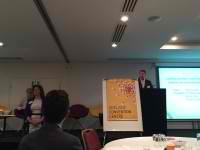 The Australian Government, Department of Education and Training, together with the OECD, hosted a workshop on Engaging Employers in Skills Development for the 21st Century on 2-3 June 2016 at the Adelaide Convention Centre.

With around 100 colleagues from France, Canada, South Korea, New Zealand and all states and territories this unique event had a programme that included:

There were numerous examples of ways that employers are engaging in skills development and work-based learning particularly in apprenticeships for employment and upskilling purposes.

To give you a flavor of the variety of case studies and views, the workshop was opened by Suzi Hewlett from the Department of Education and Training, with remarks by Dr Sylvain Giguere, Head of the OECD LEED Programme, OECD, to provide context.

John King from the Department of State Development in South Australia discussed structural adjustment in the local economy and introduced a way of considering the balance between individual, enterprise, industry, regional and state needs.

The ABN Group’s approach to apprenticeships and retention was outlined by Loris Moriconi and Jonathan Barr from OECD LEED’s policy innovation project on engaging employers, talked about the key emerging results with a focus on solutions at the local level.

Reactions to current and future skills challenges were invited from Barbara Macnish (Miles Morgan), Jenny Lambert (ACCI) and Chris Howie (Elders Rural Services).  It may have been Chris’ background in agriculture but he had some relevant ways of putting his point across for example, “… the grass might be greener on the other side because that is where the sewer pipe is!” when talking about employee retention.

Discussion included how automation would impact future job roles and I believe that all jobs will be impacted in some way, shape and form in the future.  Moreover it is not only the automation of repetitive, manual tasks but the recognition of natural language and human-computer interaction that is the bigger wave to get ahead of.

Industry partnerships to engage students such as the P-TECH pilot initiative was presented by Simon Whatmore and Dean Luciani highlighted the importance of industry leadership for apprenticeships.

Jan Owen from the Foundation for Young Australians’ outlined findings from their research and recent publication of reports including The New Basics with importance placed upon enterprise skills.

A question I posed to the panel was, “Why is Employment and Skills policy silent on Entrepreneurship?  And in its broadest sense from job creators to social enterprise and intrapreneurship?  How can we encourage policy makers to include entrepreneurship as outcomes and what programs might work?”

Austal’s Human Resource Manager, Lisa Breen, gave a very candid account of their experience training and working with a workforce in the Philippines, followed by Prof Erica Smith on research in India and Myung-Sook Jun outlining innovative models in South Korea.

On day two, Dr Michele Bruniges AM gave a keynote address and I would like to congratulate the Department on taking the initiative to facilitate such an event, as well as the South Australian team lead by Dianna Cleland, on their ability to effectively engage employers.

It was interesting to hear Anna Rubin from the OECD speaking about emerging results from the OECD’s project on engaging employers at the local level stimulating quality jobs and putting skills to good use.

Shifts and opportunities were demonstrated in talks by Renee Leon, PSM, Department of Employment, Michael de Souza from A3DMA, Sara Caplan from Skills for Australia, one of the new Skill Service Organisations, and Damian Oliver from UTS on the NDS case study for the disability sector.

In the final session chaired by Phil Loveder from NCVER, Prof Stephen Billett offered perspectives on how to enhance learning and employer engagement.  Shane Thomas from Crown Melbourne and Crown Perth presented on their approach to skilling employees in the workplace across all job roles and from recruitment through to transition.  Crown is a fascinating case study and Shane has been interviewed for the Workforce Architects podcast.  On that note, it would have been excellent to see the speakers and case studies recorded as podcasts so that this deep learning could be shared with wider networks and practitioners.

It was a privilege to present on how work-based learning is transforming enterprises, industry sectors and regions towards a 21st Century workforce.  This included examples from the library and defence sectors (credit to the DTC), School Based Apprenticeships, entrepreneurship with Triple E, skills audits and the Industry Skills Fund, international practice from Bhutan to Robinvale in Victoria, growth with the City of Monash and next gen 21st Century capabilities, careers and jobs.

It was lovely to see colleagues from way back and connect with new people too such as:

I look forward to catching up with you again soon and what a solid reminder of who is really committed to skills and workforce development in Australia!

PrevPreviousHow do you measure the impact of training?
NextFuture of VET into 2016-17Next