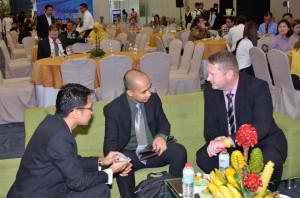 The Philippines’ booming outsourcing industry now employs a million people, after growing almost tenfold in just over a decade – with expected earnings of $18 billion in 2015.

The Business Process Outsourcing (BPO) sector is driving the country’s economy.  The industry accounted for 5.6% of Philippine’s GDP, which is expected to grow to 7.8% by 2016 and ongoing workforce development can help support this rapid growth.

Companies around the world are looking to the Philippines for BPO functions, for its low cost and English-speaking workforce, along with a supportive government.  Payroll tax, benefits administration, time & labor management, IT support and administration, is all provided at a fraction of the price in the majority of western markets.  And there’s no sign of slowing down.

The Philippine economy is the 39th largest in the world, with an estimated GDP of $298 billion.

Employment in the business process outsourcing (BPO) industry hit an all-time high in August 2014, with the growing numbers of companies driving the growth in the sector, where employment has recently hit 1 million.

Also the local government is backing the IT-BPO industry – making it all the more lucrative.

The Philippines government has been a key promoter of the industry for the past ten years.  The Philippines Development Plan highlighted BPO as one of 10 high potential and priority development areas.

Government programs provide training for BPO applicants, and give investors numerous benefits including tax holidays and tax exemptions along with simplified export and import procedures.  The Technical Education and Skills Development Authority (TESDA) is one initiative – helping the BPO industry, subsidising training for applicants.

In a recent report by the Economist Intelligence Unit (EIU), it’s suggested that the Philippine workforce can grow to about 75 million by 2050, nearly double the 40 million recorded in 2014.

The increase in the country’s labour pool is expected to account for 1% of the projected growth of the Philippines from 2019 to 2050.  An increased capital and total factor productivity are expected to drive the Philippine economy.

And the country is in the throws of a significant restructuring of the TVET sub-sector.  According to the Philippine Medium Term Development Plan the focus of education and manpower development should be on meeting the changing demand for basic, middle-level and higher level knowledge and skills.  This plan recommends strategies such as manpower delivery through a user-led strategy in both basic and advanced skills levels as well as strengthening linkages between educational/training institutions and industry.

Shifting to an industry driven, competency-based TVET system will allow flexibility and adaptability of graduates to meet changing work requirements, ensuring the Philippine workforce will be well-equipped to handle the steady growing BPO industry.

Insight – The Philippines: a young and fast growing country

If you’d like to talk about workforce development strategies in your country or region please contact Wendy Perry via wendy@wb.switchstartscale.com.au.