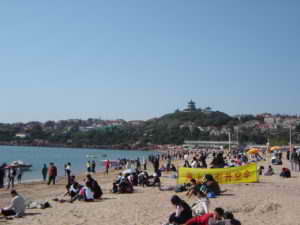 Qingdao, one of Adelaide’s sister cities in China’s eastern Shandong province – is a region with over 154 higher learning institutions. Out of these providers, 62 offer Bachelor-degrees and 33 provide Masters studies. China’s already vast education industry is set to further expand in the coming years.

In 2010, China launched the National Plan for Medium and Long Term Education Reform and Development. The Government would spend the next 10 years improving Chinese education standards to match international levels. Part of this was to open-up the sector to foreign investment, allowing for joint ventures with partners.

This year, enrolment has increased from 15% to 40%, with an expected further 50% increase by 2020. In 2016, of those enrolled in higher education, 450,000 studied at one of the Sino-foreign joint institutions around China. The increased support, both financial and regulatory, has boosted Sino-foreign joint education programs and institutions. For example, the new alliance between the UK’s University of Nottingham and Zhejiang’s Wanli Education Group.

Support for the industry is happening locally, too. There’s an increasing number of Chinese families investing in education. By 2020, China’s education market is projected to double – to RMB 3 trillion (US$450 billion) by 2020.

Although the country is experiencing an ageing population issues, its youth remains significant. Of China’s 1.37 billion citizens, 17% are between the age of 0 and 14 – approximately 233 million in need of education. Culturally, the country’s focus on education and the one child policy means parents invest heavily in their child’s future.

China has one of the biggest B2C e-commerce markets in the world. In 2016, it accounted for US$899 billion, which is almost half of the world’s e-commerce sales and 18.4% of the total retail sales in China.

The Chinese love to import goods, in line with their growing disposable income.

The platform provides a marketplace for international brands and retailers, without physical operations in China, to set up online stores and sell directly to Chinese consumers. Suppliers must agree to sell only genuine and overseas-sourced products. A growing number of foreign brands and retailers from more than 20 countries and territories, such as the US, Germany, Australia, New Zealand, Korea, Japan, Taiwan and Hong Kong, have already used it as a fast-track into Chinese mainland.

Woolworths sells about 80 products to Chinese consumers through Alibaba – a fraction of the 40,000 products available in its Australian supermarkets. The online items cover four categories: vitamins and supplements; baby; skin and hair care; and food products. The Australian brand uses this method to test market demand for these product categories, plus side-stepping into a growing ‘grey-market of middlemen sellers.’

Back to the Shandong province in Qingdao, the city is the starting point for the eastern route of the 21st Maritime Silk Road. Qingdao’s outbound investment with countries along this trade network totalled $7.46 billion during the 12th Five-Year Plan period (2011-15). The amount was three times higher than its original goal of $1.8 billion.

The city’s companies reported combined revenue of $15 billion for contracting overseas construction projects during the same period, compared with their original target of $5.5 billion. Qingdao has also been a key player with a number of overseas acquisitions, including the Export and Import Bank of China.

The airport of Qingdao is also aiming to double its international routes this year, after opening its first four this year. Sydney, LA, Moscow, London or Paris are locations that Qingdao are looking at adding to their flight routes.

Qingdao has established sister-city relationships and close ties with more than 30 cities and regions in 17 countries. These alliances have helped the city’s companies contribute to not only China’s stance, but the global economy.

The Chinese city, also a coastal hub like Adelaide, is going through a transitional shift – as it looks ahead to embrace its role as a leading economic player in China.