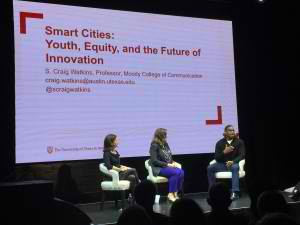 Smart cities discussion over a breakfast session, focused on GIS, housing, transport, access, equity and workforce development with colleagues from @texas_univ @acltv and links with the work being undertaken by the City of Adelaide @AdelaideSmart.

A well timed tweet resulted in a connection and chat with @scraigwatkins Professor, Moody College of Communication, The University of Texas Austin to talk about collaboration opportunities.

Hearing from Father of the Internet Vint Cert @Google in conversation with @SusanHassler @IEEEorg on a people centred approach to connectivity was a privilege – you never know where things are going to go!  Permission less innovation, curiosity, res  earch and job creation, resulting from the Internet is key reason for investing in it, says Vint Cert.

There are3 types of independent workforce members connected via @eBay with sellers, labourers & those leasing assets with many exporting.  An invitation by Senator Eric Lesser to the tech community to collaborate and engage in public policy and tax discussions for online global platforms was pitched positively.

STEM jobs are growing 70% faster that other jobs in USA says @Upwork CEO where you manage people by objectives in the gig economy where freedom is the key.  This type of work raises many questions such as, is the traditional 9-5 job dead?  What about worker protections?  How can independent workforce be supported?  It seems it is easier to understand what jobs we are seeing disappear than to see jobs being created… but are we running out of jobs?  The discussion then turned to 21stCentury Capabilities in the shift from service to knowledge to ?? economy with 1.8 million robots in the world now that are made by humans.

Considering the workforce to 2030 which outcome is likely?  How can we co-create the preferred scenario?  Perhaps it is AI that is augmented by humans.

How could AI and machine learning bots be implemented that creates more jobs not less?  This has a massive impact on all forms of education.  Take aways from the #madebyhumans SXSW included:

At the IBM lounge, questions included could you turn numbers into narratives?  Weather into a song?  Speech integrated VR to speak things into existence?

Mass collaboration via going global – scaling hackathons to multiply impact reinforced the concept into action to growth hack a town.

In the evening, @Austrade hosted a fantastic #gdayUSA event in Austin where we met @KarenBell, British Consul General in Texas with many people pare of the #UKatSXSW contingent.

A conversation with Bill Ford from @Ford on smart mobility ited solutions such as  @chariot a crowd sourced shuttle, non-linear travel, drones and cars in air.

Fascinating Gareth Evans who is the @starwars Rougue One director, followed the @StevenSpielburg book on How to Become a Film Director, was a very pleasant surprise session.

Houses as products was a thought provoking presentation about smart homes using Internet of Things and Artificial Intelligence called @_kasita with the home designed around an experience of living in a dumpster @ProfDumpster.

At the Australian networking session with @Austrade there were winning startup pitches including a very clever mobile 3D scanner know as @eora3d.

Packed session on Artificial Intelligence – the next revolution for work, play & good, highly autonomous driving by 2025 saw a live demo by @intel of:

Robots are a mechanism guided by automatic with milking cows as a #1 use through to washing machines @OTTOMotors.

When answering the question by @RIA_robotics, are you an optimist or pessimist on technological displacement?  I’d suggest pragmatist instead!

What are types of jobs now & into the future that humans & machines might do?

There will be a shift from existing jobs to new jobs, either with a focus on humans or machines, for example:

Preparing for the future of work @oliverwenz at @Cisco comes from 60’s automation to 80’s economics then virtual coworking where you are working from your garage to around the world.  There is a mind blowing acceleration of tech in the machine age – just think what happens when you ask your phone a question?

Unlike any other event in the work the SXSW trade show exhibitions ranged from reverse mentoring digital skills to @NASA mars flight to @LocalRootsFarms which is a farm in a truck.